I was wondering… did Hachiko feel any sort of doubt if his master is even bound to return? I’m not even sure if canines are capable of such reasoning, but one thing is certain though: it must have been a terribly lonely wait.

For starters, I knew what was going to happen. I knew expecting a unicorn adorned with flowers and rainbows to trudge in and rescue her was borderline delusion. I knew that the wistful thinking of an anime-original ending was out of the question. Yet, even the most blatant of spoilers (yes, I was spoiled a couple of episodes ago) wasn’t potent enough to stop the feels train from crashing to Station Tear Jerker. It wasn’t exactly the thought of her death that made the climax impacting, it’s the idea that this robot and Junker — and the world of planetarian itself — is denying the idea that they’re rotting to the core, emotionally, literally, and figuratively. Hope is the denial of despair, after all, and ignorance doesn’t always invite bliss. As someone who’ve been through varying stages of “tough times”, I can’t help but feel a vicarious sense of lament during the finale.

To Junker, there is hope in the form of Hoshino. A hope born from the realization he came to understand during his sojourn in the planetarium. Ironically, even without finding the luxury of alcohol — which is what he’s initially looking for — he became intoxicated with something else. It’s probably what his colleague meant when he was warned not to talk to that robot — presumably Hoshino — a warning meant that there’s no room for the soft in this god-forsaken world. However, as we all knew, he began to envision a new future for himself, alluding the thought that he will no longer be a Junker, scouring for the decay of the past, and instead wanted to partake in projecting the stars (read: hope) alongside Hoshino.

To Hoshino, there is hope in the form of Junker. We never really saw any implications before explaining what Hoshino meant by a little broken.  As such, hearing her come into the conclusion that she’s just a bit broken and used that as an excuse to deny the sad reality that her creators aren’t returning anymore is… a bit heavy in the jugular. However, things have changed by the time a new customer arrived. Junker’s own curiosity and decision to stay brought hope to Hoshino. Didn’t she once said that she has utmost trust to the humans in fixing everything? Well, she called that right. The Torch of Hope was passed on to her from Junker, and this is exactly where a new future will start not only for the two of them, but also for the rest of their world.

To planetarian‘s world, there is hope in the form of Junker and Hoshino. Amidst the seemingly dreary future Mother Earth is facing, a new vision for tomorrow is rekindled within an unlikely duo. After the ending credits roll, a bright light surfaces from a void of darkness. Hey, it wasn’t a sad ending after all, given that that became a hint of a positive conclusion the movie will bring! Hope, lads. Let’s hope. 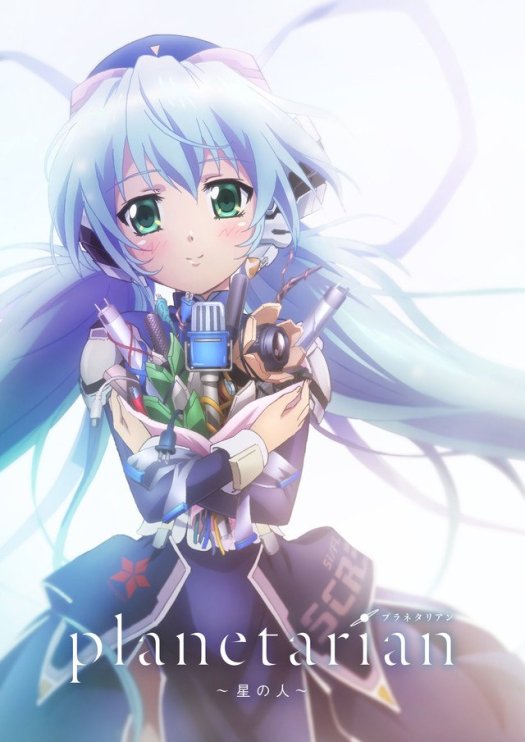 Well, I knew I went full cliche here but… that’s the general idea of what I came to after watching planetarian. I’d say planetarian did a great job at selling us an engaging story within a short span of time, and considering that it only took two characters to move the narrative, it was all well worth the blogging time I spent.

Possibly a way to see how much you became attached to the show and to Hoshino herself is through the first person view of her flashbacks from the first episode, and with the one in the last episode. The first episode’s flashback had zero impact; we didn’t know what was happening nor we cared for any of the characters. The last episode’s flashback had an entirely different effect, though, as it became a way for planetarian to remind us of how much invested we became with Hoshino, and it also served a purpose in the narrative to suggest Hoshino indeed has feelings. It was a smart use of evoking empathy, and ironically, it’s the very same sequence that I didn’t care about from the first episode that started to bring tears to my eyes. Well played, planetarian.

Now, in retrospect, did Hachiko feel any doubt day in day out after countless seasons? It would be a shame to guess yes, though other than loyalty, what if we can simply admire him for his unfaltering hope? Hope isn’t necessarily a denial of reality, nor of despair. It’s a possibility, and denying yourself with that very possibility and chance is no less than giving up. And, not giving up is and has always been part of how we live our reality, isn’t it?