Hey, this is actually a fairly entertaining episode! With in-jokes strewn around, even the veteran Shepherd within me is pleased to hear those familiar shenanigans again.

It’s another hectic episode for our heroes, yet, in-between the hellion hack and slash and community service are little nuggets of comedic value. It has been quite a while since Sorey and the crew had a break from all their Shepherding duties, as majority of the laid-back character interactions that were a major driving force of the game’s charm to me are unfortunately reduced to preview skits. It can’t be helped though, given that ToZX doesn’t really have the leisure to meander around — they have a lot more to cover plot-wise. However, this lack of a breather amidst the dreary and rustic filter is exactly what made the tidbits of wackiness all the more effective.

Take for example Edna calling a drake a puppy dragon…? Yes, puppy dragon. I vaguely remember this part from the game but hearing it in the anime was surprisingly funnier. This rather ostensible name-calling doesn’t only add to Edna’s character as a scoff and dead-pan loli, it also adds to the party’s chemistry as a whole right after Sorey and the rest subconsciously decided to call the drake a puppy dragon without any objection whatsoever. I mean, faced with a life and death quandary against a seemingly unbeatable enemy and they started calling the thing a PUPPY dragon as if it’s a matter of fact? Sure, I dig that. It may just be a cause of deliriousness from the adrenaline kicking in, but it goes to show how loose the screws are in this party. Well, of course this is all thanks to the Almighty Edna, but still… 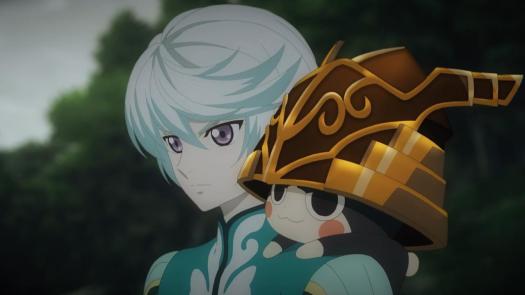 On another note, I do have to applaud ToZX (again) for condensing two plot lines into one episode effectively, then again this doesn’t come without any detriment. For an adaptation that started with introducing a vast and open world, I find the lack of coherent world-building a bit underwhelming.  It’s difficult to say exactly where and how far Marlind is in relation to the places the two parties were initially from — it doesn’t feel like we’re moving from location to location, instead it seems like we’re just moving from plot point to plot point thus diminishing my spatial perception of ToZX‘s world. The use of a reference point or a landmark we can draw from to fill in the gaps that Rayfalke Spiritcrest is this far from Marlind and vice versa would’ve been enough to suggest that there’s a real and substantial world behind what we’re watching.

To be fair though, they did use a reference point this episode wherein we can conclude that Marlind is from the opposite direction of Rayfalke Spiritcrest and the ruins Mikleo was in (the bridge is supposedly bordering LadyLake), but it doesn’t really say anything other than that. In comparison to last episode wherein Sorey and Alisha took like 2-3 days to reach the mountains, should we assume that it will only take them an overnight camp and a horse ride to reach Marlind all the way from Rayfalke?

As usual, I’m being nit-picky here (or maybe I just missed something). It’s just a waste not to flesh ToZX‘s world out considering that it has a great setting to begin with. And, for a story that has a side-dish of wanderlust waiting for Sorey and his crew to bite, wouldn’t it be awesome if we can follow their tracks and know where our adventures take us? Again, to reiterate, it’s not that easy to condense a big world into this medium specially since they have to consider the pace and materials that can be covered.

Overall a fun episode — a little hiccup here and there but it can’t be helped. I’ll see you guys next episode!