Rakugo and 3-gatsu airing back to back? I couldn’t ask for a better way to spend my weekend for the next three months. 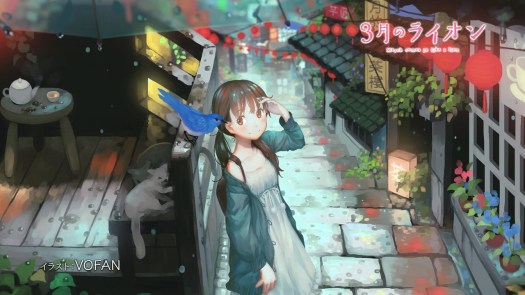 I’m getting dizzy with all the new shows airing left and right that I can no longer decide on how to start my Winter 2017 bonanza. But amidst the hubbubs of the new cutesy and fun Demi-chan, the hyped tension the wait for Rakugo brings, and Trigger fans cheering like mad in Twitter is, well, an under-appreciated gem from last year. I’m not really fond of doing awarding stuff like those Top xx anime or whatever simply because I don’t have the time to and I don’t feel the need to — so long as I enjoy watching anime week after week, I’ve got what I’m looking for — but I guess it would be unfair for me not to mention that 3-gatsu, with Flip Flappers following suit, has been my most sought after spectacle I craved from last season, and from the looks of it will probably continue its streak this Winter.

With all these fresh anime popping up everywhere, 3-gatsu makes its presence heard with the start of a new arc and with some neatly refurbished OP/ED combination. It wouldn’t feel wrong to say that we’re now watching 3-gatsu‘s second season, granted that the second OP in itself is — as what fellow blogger Zeria noted — a sort of a continuity of Rei’s development. The first OP ended with Rei’s glasses on the floor, whilst the second OP started with him picking it up. You know me as someone who greatly appreciates these nuanced stuff, and this is exactly what I’m looking for when I deem something as great. And the best part about it is that it doesn’t only end on that, as the OP’s minute of a half of greatness is also 4 seasons of feels.

4 seasons of feels in a way that it started with the Kawamoto family munching on a popsicle under the heat of the sun, then we fast forward to the vibrant color of maple in Fall, and onto the dreaded Winter when we all thought everything is going to an end. Well, you already know what happened next, so I’ll leave it up to you to answer what comes after Winter. I guess I just love it so much because it has this sense of fleeting optimism surrounding the vocals, the visuals, the editing syncing together that the first OP didn’t seem to have. It was a subtle message that, hey, life goes on and on in this cycle of the seasons; that even if we no longer have our loved ones beside us, there are always something or someone to look forward to. And yeah, it helped that I understand a little bit of Chinese because I’m a hundred percent sure that the last line of lyrics translates to You’ll always be close to me or something. tl;dr OP of the Season indeed. And nope, no pun there.

Anyways, it’s a new arc, and basing on how the OP foreshadowed the harsh season of Winter, it would be safer to assume this last cour will hit like a free falling bulldozer from space. We’re also introduced to a round of new characters such as the odd Chairman, that odd pun loving dude, that really odd dude, and that not so odd dude, Gotou. It’s also the first time I see Rei snap a nerve, and I feel like showing his reaction first before telling who and what Gotou did is one reason why I’m totally excited for the revelations to come. I mean, for someone as calm and composed as Rei to go crazy in public… thought we’d only see that in episode 10. I don’t have any good assumptions here, but given how 3-gatsu likes to paint the good and the bad out of focus means that there is, I guess, a different look to Gotou we haven’t seen outside Rei or Kyouko’s perspective. To begin with, why is Kyouko madly in love with a married guy? It makes sense for Gotou to shoo Kyouko away because c’mon. But yeah, I don’t know, Rei’s outburst intrigues me more.

I wasn’t aware of it hitherto but 3-gatsu finally grew on me. I’m now at the point wherein I get pouty even at moments wherein the show isn’t even trying to be dramatic. Like remember when I said I’d start to feel like sobbing every time I see Rei and Momo together? Damn, that second of pause with Rei hugging Momo is Clannad-level of feels. I guess it’s just a reinstatement or acknowledgement of what this anime has become to me. I’d miss it more than Flip Flappers, I would probably need more tissues than when Nagisa passed away, and I’m surely going to catch up in the manga if in the off-chance that we won’t get a third, er, I mean second season.

I guess that’s it for this week, folks. I’m going to watch Honey & Clover soon — or like I’ve been meaning to watch that show for ages. Guess today is the best time to do so. See you next week!