It’s embarrassing to do this in front of strangers, but… erm — WAGA NA WA Kindle! A blogger and master of advanced magic! He who will one day watch 1000 anime! 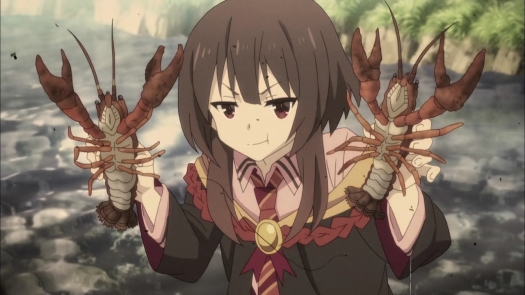 I’m sorry. This show is just so funny.

I was asking for more Megumin last week, and I can’t believe I actually got what I asked for. It’s automatically an objectively great episode when Megumin’s the centrifuge of the comedy, top that with the debut of Yunyun who proved to be a great fit in the duo’s tandem, and you’ve got yourself one hell of an explosive sitcom. There are so much stuff to laugh about this episode, all of which escalated into this one very satisfying sigh after hearing that chill ED play out.

They brought back the iconic frog gag, with Kazuma learning yet another trick in his elaborate spells and repertoire (seriously, I’m internally laughing at how he’s branching his skill points to every job/class he can think of). There’s also that hole in Kazuma’s pants, two kids playing with a snowman, the :I faces, Kazuma calling Megumin pretty because he can’t think of any other compliments to say, that gender equality jab which felt more like shots getting fired, Chomusuke playing with Wiz’s juggs in the background was so distractingly hilarious they even had the gall to loop it, Yunyun’s boobs jiggling in sync with the two syllables in her name when she introduced herself… god, I can go on and on here, and remembering each and every one of those little details are making me giggle already. I can’t recall another comedy anime that had a lot going on in a single episode.

Yunyun’s yet another fun addition to this eccentric group of characters. Her seiyuu’s nailing everything so far just like the rest of the characters. I feel kinda guilty about this, and I hate to admit that I’m finding the parts where Yunyun’s getting bullied funny (cruel of me, I know). Right off the bat, Megumin pretended she doesn’t know who Yunyun is, provoking the latter to introduce herself just like what I did earlier. I don’t even want to mention that cringeworthy flashback scene of the two, with Yunyun playing with herself… okay, that sounds a bit wrong but whatever. I love Yunyun, and I love all these micro gags Konosuba did this episode. It’s not something like Nichijou that overwhelms you with a huge, heavy punchlines — it’s just that these little things in Konosuba‘s just too funny not to ignore. 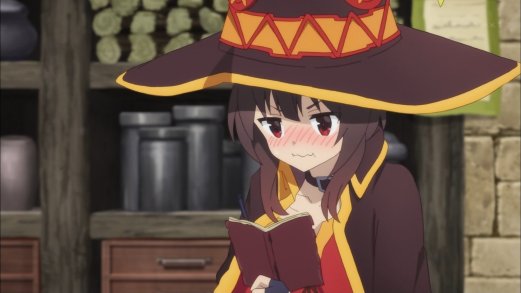 I’ll see you folks next week. Hope you enjoyed this episode of Konosuba too! Hopefully we’ll get more Megumin-centric episodes in the future.