No Sakura Quest post this week. I have…. a lot things on my plate. To compensate for that, I’ve at least made this Week 3 write-up longer than usual. Started watching Re:Creators too; a show I wasn’t initially keen on picking up because of the hearsay surrounding it, but so far I’m really, really loving what I’m seeing.

Plot’s thickening. The slice of life/low key moments are consistently hitting the marks, but the sci-fi and melodrama, on the other hand, could use a better aim. I feel like Alice to Zouroko is insistent with getting the best value out of the former — it does look like it’s going to be more of an introspective and ‘feel-good’ experience hence the direction it is going for. Does that it make the show interesting, then? I’d say unless you learn how to see the sci-fi and the melodrama as an ancillary, then yes — it’s definitely worth a watch.

Since I have nothing really interesting to talk about for this episode, I might as well take this time to declare that Alice to Zouroku has the best ED this season. Alice to Zouroku‘s sound design has always intrigued me, and at the tip of my tongue all I can think of to compare it to is Flip Flappers — the ED is simply the cherry on top. Visuals aren’t exactly eventful, yet I can’t help but release a satisfying sigh when seeing Sana(?) walk with a spring on her step, a sky blue backdrop coupled with fluffy vocals and colorful instrumentals. I’m a person who loves slice of life and low key narratives, and this ED perfectly encapsulates the mood I get when enjoying the genre.

All right. This isn’t exactly about BnHA, but this vid about spoilers indirectly explains why I’m not that hyped for this second season.

While Super Eyepatch Wolf provided a sound analyses on whether or not spoilers do ruin the story, I kinda feel like most of the arguments provided were rigged in favor of the answer NO… granted that NO is basically the only obvious answer we can conclude.

1.) To start with, Yu Yu Hakusho was a bad example for an anime that isn’t plot-centric. I didn’t care about Yu Yu Hakusho‘s plot whatsoever, because like most of you did I only watched it for the shounen action stuff and the sakuga. It’s fairly obvious that anyone would’ve enjoyed it even if the plot was toned down.

2.) I know I’m being pedantic here but the title irks me for some reason. I would be more convinced if the vid’s title was ‘Do spoilers ruin your enjoyment of a show?’ or something. He could’ve had answered his vid’s title without him needing to give a lengthy extrapolation.

3.) The comments section pretty much sums it up. It doesn’t ruin a show’s story, but rather it can dampen our enjoyment of a story’s climactic moment. The ‘scientific test’ defense was okay, but I still can’t take it at face value. If you loved the acting, the direction, the music, and still gave that movie an 8, then what more if you weren’t aware of the twist at the end? Won’t that also supplement your appreciation of the show’s other technical aspects? It’s as if not watching the movie from until the plot twist is still enough to warrant it an 8. Bullocks. Sure, being spoiled by just the twist and not the entire thing can still leave you to appreciate other facets of the show, yet what you’re merely doing is subtracting from a whole; that doesn’t make 99 any equal or greater  than 100.

4.) Resident evil? Subtle acting? I don’t know, but the feeling of not knowing what the fuck is going on is definitely more gratifying (if you can call pissing yourself scared gratifying) than noticing some goddamn character acting in a goddamn macabre setting. Of course, that’s how you enjoyed the game and I don’t really want to put words into someone else’s mouth. I lose this round.

5.) This doesn’t justify why I am not enjoying BnHA‘s otherwise awesome second season. I’ve read the manga and thought it was awesome. I watch the second season, and I think it is boring as hell. Why? Because I already know what is going to happen next like **************** winning the school festival crap or whatever. I suppose I should now admire the anime because it has colors whereas the manga doesn’t? 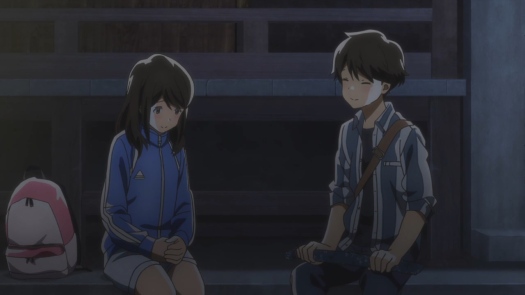 Welp. Tsuki ga Kirei is doing a fine job at its rendition of modern day wooing. I mean, there hasn’t been that much romance anime around that stages most of its character interaction over the cyber space, prolly because the source was set prior to the boom of social media. Even then, I can’t really speak on behalf of the Japanese people how their romance generally buds, but so far Tsuki ga Kirei is nailing every bit of how I’ve managed my, uhh, boy-girl relationships over the past couple of years.

Philippines is well known for its intimate relationship with social networking, and for some of us introverted millennials, social networking has played — more or less — a vital role in how we interact with each other, particularly with our significant others from earlier years. I met my ‘significant other’ through an online game, spent most of my time with her on Facebook Messenger and texting, and cut ties with her through the same way. Tsuki ga Kirei offers not only a poetic and heartwarming story of middle-school romance, but also that of nostalgia. It is and isn’t unique with this kind of approach and setting, and, yeah — like what I told you folks earlier this season, I want something new to my romance anime, and Tsuki ga Kirei turns out to be that breath of fresh air I’m looking forward to. 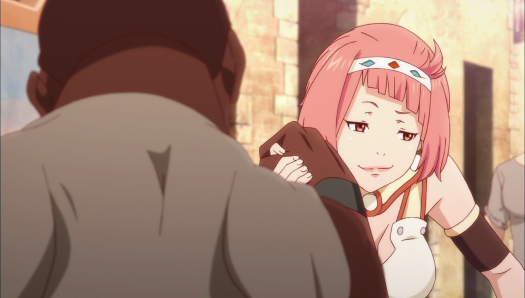 Virgin Soul remains to be my top anime for this season. Nina is awesome. Favaro is returning. Rita is kicking ass more than ever. It’s doing a great job at leveraging its prequel’s already established characters, and boy this is just the kind of fan-service I’m eager for.

Looks like we’re building up to yet another cathartic Trigger climax. I’m so fucking excited.

I absolutely want to hate this show, but I just can’t ignore something this good, can I?

Despite SukaSuka‘s applaudable premier, I still can’t say whether or not this is going to be a keeper. Episode 2 does offer further insight on to what we can expect from this show like how it handles its respectable fan service, violence, romance and whatnot.  I only fear that SukaSuka can hit the right notes when need be, but we’re about to find out soon, I guess.

Guess what? I finally caught up with Re:Creators! Short impression? It’s good, and its premise makes up for whatever it lacks in execution.

The first episode’s tone and direction was all over the place, and the sudden jokes the characters were making ended up jarring at best due to the breakneck speed the development is progressing. While Re:Creators may feel like one of those ambitious anime bound to become a train wreck, its premise of ‘characters from various anime coming to life in our world’ is quizzical enough to illicit curious discussions from its viewers. In a way, my appreciation of Re:Creators somewhat mirrors that of the audience’s reception of Yuri!!! On Ice. What would happen if Goku from Dragon Ball in Super Saiyan 4 mode trades punches with One Punch Man’s Saitama; those kinds of stuff, reminiscent of ‘what would happen if I draw Yuri and Viktor like this…’. Oh, and returning to what I mentioned about its execution earlier, Re:Creators has its moments wherein it’s nailing its comedic timing specially in the last 2 episodes. Other than that… the rest are acceptable at best.

If anything, however, what’s more interesting about this is its application of what I think is how an otaku’s underpinnings work (that, and their consumption of fiction specifically these desirable anime girls) with regard to a certain academic book, Beautiful Fighting Girl, which I only started reading until recently. It  proves to be an insightful look at how we can define what an otaku is, and to be candid I’m learning a lot of things I normally wouldn’t have known by just watching anime and forming opinions. I ain’t an academic, mind you, and I’m still trying to piece together in my head what I’ve learned hitherto from what I gather. But yeah, Re:Creator‘s entry into my weekly watch list just makes things even more interesting due the nature of its premise and its correlation with Beautiful Fighting Girl (and probably any other academic papers of the like). I’ll talk about this part more in the coming weeks, I guess, once I’ve finished the book. Watch me sink these dirty, uneducated hands in the sea of academics.

Just minor quip with this game. Persona 5 is great and all, but I feel like its characters got a bit caught up with its main plot. Persona 4 Golden is great in a way that it gives ample breathing time for the main crew to bond together, as well as a breather for the player to just sit back and forget about grinding EXP or leveling up confidants. Sure, The Phantom Thieves still do have their own fair share of picnics, yet they aren’t that memorable in comparison to Persona 4‘s shenanigans. Hawaii was supposed to be fun, but they only used it for you to 1.) go out with a girl of your choice to eat some shrimp(?) and 2.) talk about the main plot… again. Take for example Persona 4‘s own iconic outing. They went back to that bar the Persona 3 guys frequented, Yukiko got drunk, they got drunk, played the King’s Game, they got raucous and rowdy, and that isn’t even the end of it.

Well, you get where I’m coming from. It isn’t to say that Persona 5‘s main plot is uninteresting or anything, heck I’d even say that it’s one of the most polished and thought out narrative between 3 and 4. It’s just that without these cutaways, it only ends up as tedious and repetitive.