Summer is in the horizon, and I’ve still yet to scout which new shows I’m going to cover. 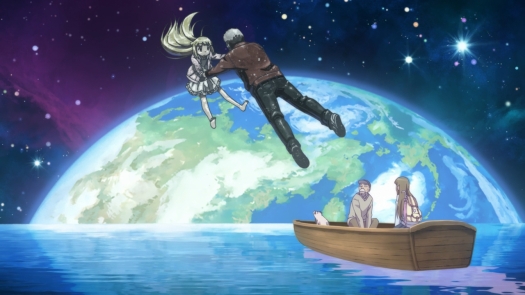 Hardest thing about connecting with Alice to Zouroku‘s characters is that, well, they’re still kids with kiddy problems. Of course, we can still sympathize with them to an extent, and even I can say that I’ve been more or less in Hana’s situation too. It’s just that growing up, going through shits left and right made me somewhat desensitized with similar/common topics. Perhaps, Alice to Zouroku could’ve utilized its visual further and used it to portray what the characters are going through underneath, instead of us trying to find a connection from their dialogues. I don’t know — just trying to explain why I’m rather jaded here.

Ahh, tournament arcs. Contrary to what other people say, I find BnH‘s recently concluded arc nowhere near, say, Dragon Ball Z‘s or Yu Yu Hakusho‘s level. Of course that’s just me but… other than the sakuga stuff, Todoroki and Deku’s match (and Ochako’s cuteness), what else is there to compare to the latter shows’ epic proportions?

Best part of this episode is Christa doing magical girl poses mid-air. Also, been hearing that the following stuff in the manga after this chapter is going to get good. Maybe I should just hold off in catching up with the manga and wait for season 3…

I am not angry! (I’m just jealous)

Pretty much everyone of us at some point of our relationship has gone through a similar misunderstanding once or twice (any more than that and it’s not healthy). Looking back on my own tragic love life, I’m pressed to say that it’s honestly puerile, but as an outsider in seeing someone other than me take the matter seriously was rather mellowing to say the least. They’re at that point of their relationship where they start to unravel the emotional intricacies of what it takes to keep the flame going. There’s no reason for Azuma to feel annoyed, other than the fact that, well, they’re just new to this sort of thing. He doesn’t understand what to make of of this new feeling (no, he just doesn’t want to say that he’s jealous), and neither does Akane know why the hell her lover is in a bad mood. And… that’s cute.

It’s another stereotypical phase of what normally happens in any given relationship, specially in the case of young/adult teenagers. Tsuki ga Kirei manages not to overly-dramatize itself as should be. It’s love as is, and maybe that’s why I find its low-key narrative so cute and mellowing. It captures what my ideal love life should be — no NTR, no dramatic plot twist, no puffery, just the right amount of salt and sugar here and there. Romance stripped down to its basal foundation. I have to admit. I think I’ve grown somewhat pessimistic with romance (as evident even with my coverage of Kuzu no Honkai), but perhaps that might change with just the right dose of Tsuki ga Kirei. 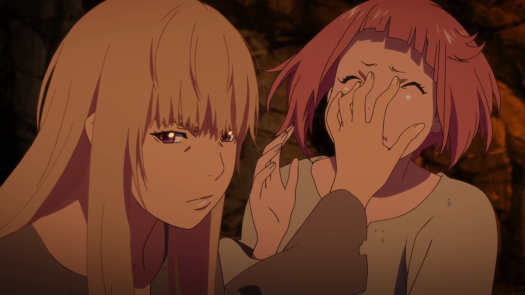 Nothing big going on. Just Rita saving the day and Nina getting heartbroken. 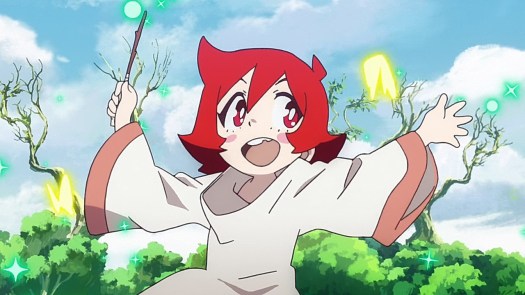 A believing heart is your magic! I totally forgot about this catchphrase. If LWA can’t get any explicit than that then I don’t know what it is.

I don’t really have anything to say for this episode. It’s more or less a validation of what I’ve talked about last week, so yeah. To those who stuck around and believed in Akko after all these episodes, my brethren, we will be rewarded by something spectacular only Trigger can produce. There’s no ounce of hyperbole in this statement.

If anything, this episode made me realize how much Akko’s presence weighs in LWA. You say LWA, you think of Akko. The two can’t be without one another, as such it just felt weird to spend half an episode to listen to other characters speaking besides her. I reiterate it again: her character’s fine. She’s definitely fine the way she was in episode 1, 5, 6, 14, 21 or whatever. Looking back on my previous weekly posts, it seems as if what I’m disappointed with was how that (whatever episode I was bored with) episode was played out. Remember the episode with Constanze? That episode was like the end-game, and by then Akko should’ve had an millimeter of progression with her character. Well, that didn’t matter, because the episode in question was just well constructed. How about that episode where everyone turned into a moss? Nah, that episode was baffling. You get where I’m coming from.

Or maybe it just doesn’t get as much credit with other people because, you know, fan service, incest, lolicon labels get in the forefront of their viewing experience. Still, outside its risque elements, Eromanga knows how to deliver an emotional tug to your heart despite the contrivances. Characters with legitimate motivations are given enough time to be fleshed out in a short span of 11 episodes. Character interactions and dialogues are cute, utilizing sakuga animation even on the tiniest of movements, and heck even that clever use of ‘pop-up’ messages on-screen was cute.

Point is, it isn’t exactly wrong to shit on a show (in our case Eromanga) just because you disagree with one of its aspects. What I don’t sit well with is turning a blind eye to how it handles its other elements. I’d concur that this show could’ve fared well without the risque stuff, but then again it is what is, and Eromanga Sensei isn’t totally comprised of fan-service from head to toe.

So, apparently, main girls from sekai-kei stories are more likely to become top-tier waifu material… why is that?

I don’t know. Re:Zero‘s Rem, Kimi no Na wa.‘s Mitsuha (hell, even Nier: Automata‘s showing hints of sekai-kei) to name a few recent titles, and now we’ve got Chtholly. Sure, SukaSuka may be under the radar but she’s definitely going to be everyone’s apple of the eye if the show’s given enough attention. Prolly because it’s a requisite of sekai-sei stories to focus more on character interaction (more specifically to the main couple), hence they’re given ample breathing room to develop more than the average genre? Whatever. I’m just contemplating here so don’t mind me.

Still loving the world-building of this show. It’s going steady and smoothly that’s relative to Chtolly and Willem’s relationship — neither of the two elements of the show overshadows one another. Every episode we keep on learning a bunch of stuff about its world, all the while treated to some intimate tête-à-tête from our main couple. I wish they’d continue doing this. I wish they’d just live happily ever after. Here’s to a big, fat middle finger to death flags.

Woohoo!!! More talking. This time we get into Sota’s story. I… don’t know. It wasn’t really much of a reveal given that it has been pretty obvious what Sota and Shimazaki’s connection was. I guess where things will get interesting is what happened afterwards.

I’m turning 23 soon. I’m getting two books and some PS4 games for my birthday. It has been 5 years, I think, since I’ve gotten into watching anime. I wish I started blogging and/or reading academic stuff earlier. For some reason, I’ve been thinking lately how much I could’ve been productive these last few years. Well, whatever. Maybe I’m just starting to grow old… oh wait.