Supposing that I am a painter. I have in mind an image of a person staring through a vast, open space clutching a fidget spinner on his right hand. How do I bring about the life of this image onto my blank canvas? 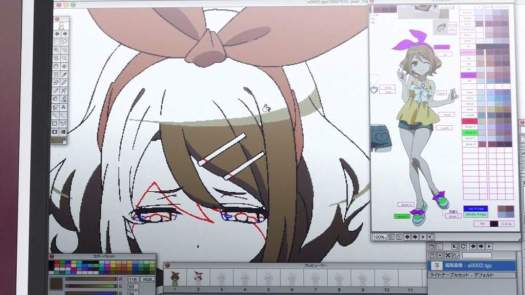 I’ve been seeing enough arguments about ‘visuals vs. narrative’ on my Twitter feed that it’s honestly difficult not to ignore them. For the record, I more or less agree with everyone of them. I mean, I’m not really picky with whatever I watch as long as it’s within my description of enjoyable. Anime is a holistic expression, after all. It’s a synthesis of various elements assembled together to fashion one final product with varying genre. In the end, it’s meant (and wiser) to be viewed it as a whole. However, what if I do try to break this construct into smaller, singular pieces? I’ve been asking myself this question ever since I’ve thought of a couple of instances that doesn’t quite sit well with my initial take away on these debates.

I’ll play the devil’s advocate and spoil you folks as early as now. I guess it all boils down to one’s tolerance between what is expressed and how it is expressed. It’s just that without the medium, how else can we perceive the idea behind an expression?

I’m pretty sure most of you are already aware of how the general anime production works. A bunch of guys from different departments/companies attend a round-table discussing what kind of anime they are going to make: genre, target audience, setting, mood, tone, story, character design and whatever goes into this process. Once everyone agrees on what to produce, it’s at this point that they search for a suitable animation studio who will animate these melange of proposals (or, correct me if I’m wrong, the animation studio will already be part of the pre-production talks between committees). The director receives the orders, he makes the storyboard (or supervises it), and then passes it along to the animators. With this structure I’m lead to believe that the substance/narrative is an element that would remain constant.

Think of it like this. The visuals, being the mode of expression, is a conduit — a vessel through which a substance defines itself. I have a liter of fruit soda. Do I pour it into a stylish, pear-shaped glass wine, or on a ceramic mug? Neither. Because a liter of soda will spill on those containers. In this analogy, you can also pour that same liter of soda into a swimming pool. Well, that’s impractically style without substance. But that’s fine for me (again, it all boils down to your tolerance). Of course, the substance can easily be lost in its container, however the fact remains that it is there — it is expressed, it just so happens that we have to take in that extra effort to find a needle in a haystack. At most times, this activity of sifting through the container becomes the substance itself.

Let’s have a more empirical example here. The reception to Flip Flappers is that of a classic polarizing opinions between style and substance. In retrospect, my take seems to reflect that of the majority who found their enjoyment by immersing in the show’s surreal depiction of its world. The first seven or so episodes I scrupulously (or pretentiously, if you will) form theories about everything that is shown on-screen, whilst the other layer to the show only became fait accompli during the final stretch where its production quality started to crumble. In this sense, I got too immersed in its visual presentation, but that in itself is able to fill the void in the container. Remember, art is an expression, and for it to be called an expression the medium has to be perceivable for an audience to assess with their own lenses (to reiterate, with varying tolerance). Incidentally, I somewhat lost my interest with Flip Flappers after its quality fell apart. This may either be due to the reason that 1.) I got too immersed with its surface layer or 2.) its visuals just can’t hold what the narrative is trying to convey. I suspect the latter, because I genuinely wanted to love what it wanted to tell during its last hurrah.

Don’t get me wrong though. I’m not saying that everything has to consist of impact frames or 60fps animation. As long as the visuals is able to comply to the demands of the narrative, then I don’t have any complaints about that.

This usually applies to, say, a genre/situation that doesn’t require extensive movement. Anime like NANA, and Aria have an obvious dated look to them, yet it never bothered me as much because its story and visuals are in perfect harmony together. Gunslinger Girl‘s first season (image above) has this gritty and rustic look to it which is a suitable fit to its rather nihilistic perspective, but a cursory glance at the art design of its season second turned me from an avid fan to an infidel in three seconds flat. Seriously. I love what it has to tell about existentialism and I felt like its story is one of its stronger points. You may be thinking that I’m already shitting on it only after looking at the key visuals but… it only took 2 minutes for all the immersion I brought from the first season to get thrown out of the window.

It’s interesting to see those who value a good story as their first criteria for recognizing an anime as good, yet the very same people can’t watch a thing from the 90s/80s because of its obsolete look. Is is perhaps because of a generation gap and how our sensibilities differ due to zeitgeist? Evangelion may very well be the Mob Psycho 100 of the millennials, but now it’s considered antiquated by the uninitiated. Yet here we are. We demand remasters of the classics. It looks to be our perception is inflated by the climate of the artistic environment we grew up in. So does being ‘dated’ have anything to do with whether or not the container can be sufficient for its substance? I don’t think so. Then again, animation is constantly evolving. We see new and innovative ways to express a story, hence why these ‘dated’ stories can be reimagined to fit into new containers.

Maybe this doesn’t solely depend on whether or not our level of tolerance can pull us through either from janky visuals or a discombobulated storyline, or worse a combination of the two. I guess… a nuanced viewing is vital in enjoying an artistic product as a whole. You always have to keep that curiosity within you. The visuals suck? Ask yourself why. The plot is stupid? Try to look at it on a different angle, maybe the visuals has something to add to it. I don’t know, but I do believe that the best anime fan is someone who can enjoy an anime to its fullest regardless of the what it is.

One Reply to “Visuals and Narrative”