Hands down, Violet Evergarden‘s pilot episode looks absolutely stunning. Of course, its gorgeous look is already something that’s within my (and everyone else’s) set of expectations after gluing my eyes in its promotional videos a bunch of times. It’s difficult not to argue that this may come down as the most impressive looking TV series we’ve gotten in recent memory and for seasons to come, one that even surpasses theatrical standards. Most likely everyone in your circle can’t stop gushing over how beautiful everything in this episode is — and I don’t blame them for bugging the hell out of you to watch this anime immediately by other means that is not legal — but for all the praises and love I’d like to shower its exterior with, that’s only one quality out of many that made me fall in love with this episode.

The OST was just as vibrant as its visuals, and it easily reminded me of something I’d hear anywhere in Final Fantasy 9. Whether I’m walking in the bustling streets of Alexandria, or in the middle of an emotional dialogue, the sound of orchestral instruments would dance in the air, painting another layer to an already vivacious world of magic. The comparison is only well-founded (for me, at least) given that they both have this Victorian-esque era feel to them, with Violet Evergarden sounding a note more ‘Western’ (or for lack of better words, European, if that makes any sense). I may not look like it, but I have a fondness for western-ish medieval settings, and works like Princess Principal, Romeo x Juliet, Claymore, Akagami no Shirayukihime automatically earns a check mark on my list, most likely because everything with its genre elements is concomitant of fantasy and magic.

Not only was the OST’s quality on par with its visual tour de force, but the way KyoAni used it to full effect beyond that of a non-diegetic sound was also something worthy to take note of. I don’t think Violet Evergarden would entirely rely on its extravagant visuals to effectively convey an emotion or a thought as how 3-gatsu no Lion does it explicitly, but rather it does so in precise and subtle ways, like rhyming words in a poem. One favorite shot of mine is that dialogue between Violet and Hodgkin, with the latter saying that the war is over as if the news is fait accompli to Violet. The notes from the piano trailed off at this part, extinguishing whatever stubbornness Violet had in wanting to see and be of use to Gilbert. It’s the first time I felt a tinge of melancholy amidst Violet Evergarden‘s bright and vivid displays, and it somewhat surprised me that it already had control over my emotional gears this early on.

Another part that struck a chord with me is that eleven-second shot of a grandfather clock ticking with Violet reflected in its glass — surprisingly the longest shot from this episode and is a significant extension of Violet’s characterization. I felt iffy at first with how quick the shots in this episode cuts to the next one (like that extremely quick shot of the tea spilling over). I thought it would’ve been great if the show would let our eyes lavish in the lush details by making a shot last by a second more or two. In a way, it may have simply been reflecting Violet’s impatience to rush and find a purpose and an answer, like how that time-lapse shows a progression between night and day like an eager child who wants tomorrow to come in an instant. Perhaps that eleven-second shot of the clock was more of a reflection of Violet being stuck in the time where Gilbert left her his parting words, as if her distinction of the present became suspended in that very moment. Or perhaps Violet finding what she really wanted to do brought time back to its proper track, someone who is now taking their first few steps of moving on from the past.

Whatever the case is, this first episode not only succeeded in reaffirming our hopes that Violet Evergarden will most likely set new standards of quality in TV animation, but it also laid out a solid foundation for me to emotionally invest myself in its characters, both through its OST and cinematography. Like, the second time I watched that part with the grandfather clock honestly made me tearful. I thought something was ‘not funny’ (but in a cute way) when Violet bit that dog stuffed toy, but I guess it was just her wanting to save his master… like a dog. It certainly is beautiful to look at, but underneath the surface there’s a deep sadness waiting to burst out of the seams, something I feel will be hard to miss especially when we’re too caught up with the pristine animation.

I think at this point my bubbling anger has just boiled into a searing hatred for everything disgusting in this bullying arc. It’s like I’m driving a Ferrari with no brakes, my foot hard on the pedal, and I have this intense urge of running over everything within my line of sight. There’s a swarm of furious mob inside my head screaming at the top of their lungs for Hina to wipe the smugness out of that bitch’s face.

My emotions had so much forward momentum at that moment that I’ve forgotten Hina wouldn’t do such a thing as resorting to violence, and I have to say Shaft really did a fantastic job at selling the idea that she really would go berserk. Hurting someone would’ve given us undeniable satisfaction, but as what Hina said it’s nothing but playing into Akagi’s own trap — a temporary moment of victory. If I were in the former’s shoes, I’m somewhat sure I’ll already be at a parent-teacher meeting discussing my expulsion from the school. Realizing my own callowness in such a tense situation only made me admire Hina a lot more. When patience is running thin, when a person is beyond reasoning, when you want to unleash living hell onto someone, it takes a lot of mental fortitude and courage to hold your ground amidst the raging torrent of bullshitry. A verbal joust is another way to shut the other party up, and I have to thank this badass new teacher for voicing what was going on in my mind the whole time Takagi’s mum was asking Akari for proof.

Now with a cooler head and leveled patience, I kinda do want to hear what Takagi wanted to say about all of this. 3-gatsu plays with the idea that there are two sides to a character’s personality — a guy would look like a Yakuza but is actually a pigeon lover etc. — so perhaps we’ll see an episode where the perspective is shifted into Takagi, warranting how she became such a rotten person to the core. I think another answer on how we can stop — or at least minimize — bullying besides the victim standing up for his/her own is surrounding kids a healthier environment to grow up in (parenting and a well-rounded educational system comes into mind) preventing the problem before it even surfaces, scrutinizing a deeper root cause than just kids being kids.

Aaaaaaaaand it didn’t take long for 3-gatsu to do just that as episode 13 is pretty much what I was expecting to happen. It should really be over by now, and we can finally draw a huge breath of relief now that this soddy feeling is gone from our chest. We have succeeded in saving Hina’s smile, and this will go down as one of the biggest accomplishment anime has to offer this 2018. No fucking kidding. Yes, I know. That arc lasted longer than we were expecting, but the pay off is just as well deserved provided we see the Kawamoto family and everyone else having a fun, comfy day. Now let’s wait until this Rei x Hina ship come to full fruition…

Ahh, there goes an instant favorite, folks. I know there are a bunch of cute girls doing cute stuff anime this season but I’d easily watch Yuru Camp first before any of them. Everything is hitting the right notes even after two episodes in. The OST is comfy af, almost sounding like it was done by GONTITI or Choro Club. The character designs are to my liking, having this malleability in stretching and contorting into worthy cutesy reaction faces. The comedy delivers its punchline timely and with confidence and doesn’t feel overdone nor vice-versa. The visuals and background are undeniably inspired by real-life locations which certainly adds to the “realistic” feeling of being outside even when I’m comfortably tucked in between my bed and blanket. We haven’t seen the full cast together but I can only imagine from their recent hilarious interactions that they’re going to be one helluva fun gang to watch.

As I say these I just realized that there sure is a lot of shenanigans going on with Yuru Camp which, I guess, put it well away from the usual criticism iyashikei-ish slice of life anime garner like being too slow, boring, or that “nothing’s happening” (to begin with there’s no such thing as “nothing is happening” — what are you? watching paint on the wall dry?). Little stuff like Shimarin’s adorable bun and her friend fashioning her hair into a bear-bun (PFFFFT). Shimarin and her dskopwrowcpo53o5d315jp chat exchanges (LOL). Shimarin talking to herself whilst wandering around the campsite (God, that’s so me). Those camping know-hows (may come in handy by the time I hike a mountain). That speaking(?) pine cone (why?). That commentator joining in with the fun. Man, Yuru Camp makes camping so much more enticing than a trip to Antarctica.

Darling in the FranXX – Episode 1 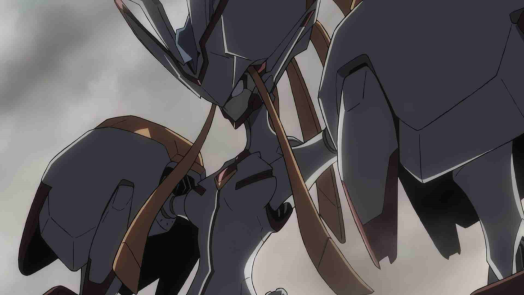 Not bad. Not bad at all. This reminds me of a combination of… a lot of things (not just A-1 and Trigger), but I’m not gonna dwell on that too much. Darling in the FranXX has laid out a very interesting premise with a solid punctuation in its premiere, and raising its own bar with a seemingly elaborate narrative and chockful of sakuga is pretty much what I think where Studio Trigger’s milieu is. Simple yet has heart, Hakumei to Michiko‘s first episode was a perfect choice after a long day at work. It may not look like the best of the bunch visually, but that’s all fine and good — it doesn’t really need to show off, and its honest aesthetic already has enough charm to ease the clutter off my mind.

Mahoutsukai delivering the feels from Joel and Leanan Sidhe’s side story, all the while contrasting how much Elias needs work with his aloofness. Not sure how the pace progressed in the manga but at this rate we may need another season for Chise and Elias’ ship to even start sailing.

I only have one day off this week so I’m not really sure if I should delay this post next week or not. You’re reading this now so I obviously decided the former, then again I only had… more or less 8 hours to catch up with the new shows and write about them so yeah. I think I can squeeze in one or two more anime starting next week. I have stuff to say about that Antarctica anime, plus I still have Citrus, Overlord II, Dagashi Kashi, and that romance about an old guy and a highschooler (forgot the title) to watch. Oh, man. I want to do so many things at once there’s just not enough time. Why is a day just 24 hours anyway?